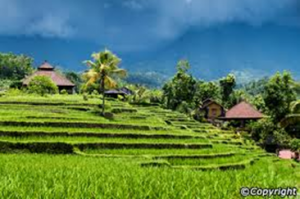 Ubud. Say it out loud:“Oobood”…(Rhymes with “GOOD”…which is quite telling of this community, where even if you mispronounce the name, the locals aren’t likely to do anything other than smile and say “seng ken-ken!” – Balinese for “no worries)”.

While Thailand is known as the “Land of a Thousand Smiles”, this is a world where there is a smile for every emotion. Living in Ubud, I’ve experienced a positive attitude from a beautiful community of Balinese people. This, in my mind, is no doubt a reflection of a way of life, a way of thinking that stems directly from their devout Balinese Hindu faith.

An example: Yesterday, my cab driver came centimeters from running right into an oncoming van. He simply didn’t see the vehicle. As we all gasped in fear, our van screeched to a halt just before we t-boned the other van. There was a strange silence, not because of fear that had subsided – it was something else. We looked at one another, and were more astonished at the interaction between the taxi drivers.  The passengers in my van – from NYC, Amsterdam, CA, Sweden, and Germany – all assumed this near-accident would provoke yelling, or that a frustrating, angry interaction would occur between the drivers; instead, they smiled with respect and nodded to one another. It was like they knew something we didn’t. They knew that it does no good to react angrily and yell. Certainly, an unexpected reaction from the typical taxi cab driver!

We were more in shock over their kindness than we were in gratitude of being alive…that’s how ingrained in us it is to expect certain behavior, in certain people or in certain instances. There was no anger, no place of blame – just an exchange of pearly whites, and we were on our merry way!

Next time someone cuts me off on my scooter, I will remember the Bali way. I will try not to throw my fist in the air, in a frustrated response from almost needlessly dying!  I’m going to keep both hands on the handlebars where they should be, and smile that I’m alive.

Free Video is yours now